The leaders of three prominent business at Teesport have been recognised as some of the most inspiring across the Tees Valley in a recent poll.

The annual poll, in which local business magazine, Tees Business, invites peers from across the region to vote for their most inspiring colleagues, saw Frans Calje of PD Ports, Bill Scott of Wilton Group and Gary Dawson of AV Dawson all place within the top 10.

The highest placed male in the list, and the highest ranked non-native Teessider, Frans Calje came second, jumping up two places from 2020.

“I’m incredibly humbled to have come second in this year’s poll,” said Frans. “It’s a great honour to feature on a list of such influential and inspiring leaders from across our thriving region and it’s also fantastic to see so many fellow business leaders from across the River Tees place so highly.

“Following a hugely difficult year, we have continued to work together to allow the Tees Valley to flourish, to attract investment and to keep vital trade flows moving whilst protecting the wellbeing of our people. We don’t do that for the recognition, we do it with the collective aim of enabling our region to prosper.

“As the Statutory Harbour Authority, we feel that it our duty to maximise opportunities for the region, facilitating trade growth and supporting the business objectives of our colleagues across the river in order to create-high quality jobs and support the communities and environment that surround the river.

“It’s hugely rewarding to see that our efforts at PD Ports are valued as we continue working to deliver on our future vision to make the River Tees the UK’s most successful port region by 2050. I send many congratulations to all of my friends and colleagues who have also featured on the list.”

Bill Scott of Wilton Group has consistently placed high in the standings since the launch of the poll in in 2016, winning in 2017.

A hugely-respected figure on Teesside, Bill, who placed fourth this year, has built up his business empire at the foot of the iconic Transporter Bridge and now presides over three fundamentally important Teesport businesses in Wilton Engineering, Port Clarence Logistics and Universal Coatings.

Bill said, “It’s been tough for businesses in general, firstly the drawn out process of Brexit, followed by a pandemic of which this generation has never seen before which has sadly seen families lose loved ones as well as an increase in metal health and anxiety within the community. However, in the main, businesses have worked hard to protect their staff and livelihoods to give the companies the best chance of success going forwards.

“In that regard it was a pleasure to see the good and the great of Teesside Businesses within the list of inspirational leaders and absolutely wonderful to see Jane Turner and Sharon Lane in the top 3 with Frans Calje. In addition, it is awesome to see some new faces on the list proving that we have the emerging talent coming through to support the next generation of inspirational entrepreneurs.

“The Tees Valley has this unique ability to collaborate at all levels, understanding that together we go further and the recent announcements regarding Freeports, Treasury North, DIT and GE has really boosted the moral of the area and we all very much look forward to our next exciting chapter.”

Another prominent figure at Teesport, Gary Dawson placed sixth in the standings this year, jumping five places from 2020.

Gary has spearheaded AV Dawson since 2000 and led the business’ rebrand to the Port of Middlesbrough in 2020. He said, “It’s great to be regarded amongst people on this list for whom I have utmost respect. Teesside is very much in the spotlight right now and what is really refreshing to see is the emerging new talent and inspiring business leaders featuring in the top 30.

“Whilst industry and logistics businesses like ours are forging into new territories such as energy from waste and offshore wind, there’s a tide of other emerging sectors, such as the tech and film industries, that are propelling the region forward and changing perceptions.

“As a business community we support each other, and as chairman of the Tees and Hartlepool Port Users Association I am acutely aware of the challenges but also the opportunities that lie ahead for area with the river at its heart.

“Like the majority of businesses we have faced extreme challenges over the past year. We have simply led with our colleagues’ health and wellbeing at the forefront of our minds. Our successes have been achieved together and I am incredibly proud of what our team has accomplished.

“We are now embarking on an exciting new chapter. New developments on site and the launch of Port of Middlesbrough will help grow and develop our business, bringing further prosperity to our river and region.” 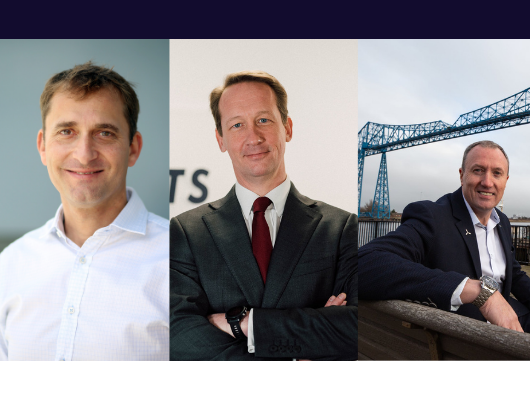